Formal meetings are often required by a group's constitution or governing rules. They have established agendas and procedures. The agenda deals with what's to be covered at the meeting, while procedures cover how that will be done.

AGMs are usually a reporting requirement for any type of organisation. They are also an important opportunity for all stakeholders, e.g. customers, clients, employees, committee members, suppliers, etc, to review the state of the organisation and to report on its performance.

The AGM is the forum to elect officers for the organisation and also to promote the organisation to your community - it should be well publicised and welcoming to all.
You can encourage attendance by:

An agenda is a list of items to be considered at a meeting and gives a meeting direction, structure and purpose. The responsibility for preparing the agenda lies ultimately with the secretary, with some assistance from the chairperson (and treasurer) where appropriate.

Notice of the AGM and the agenda must be circulated within the timeframe set out in the organisation's rules. This is usually around three weeks prior to the meeting date.

The AGM agenda will depend on the legal structure of an organisation, how actively it's been operating during the past year and how much engagement the board is seeking from those using the services.

Regardless of which type of agenda is chosen, preparation is vital so that the meeting runs smoothly and achieves what's needed. The chair, in particular, needs to be well briefed and prepared to manage the proceedings to meet its objectives.

As mentioned earlier, there are established procedures for conducting formal meetings. These procedures might be recorded in an organisation's constitution or rules or be established more informally by the group's usual customs. The procedures can cover a huge variety of matters but some more common aspects include:

Voting at formal meetings can be by:

In the case of a ballot, two scrutineers should be appointed one from each opposing faction, if there are any. They give each member a slip of paper with a list of candidates on it and members cross off names of the candidates they do not support. The scrutineers collect the slips and count them outside the meeting room. After counting is completed, the chair moves that ballot papers be destroyed. In the event of a tied vote, the chair has the final (or casting) vote.

The rules governing groups generally require a quorum, or minimum number of people, to be present before any meeting can be held. The number can vary depending on the size of the organisation, but it is usually a third of the membership. Decisions at meetings are valid only if there is a quorum present. If a quorum is lost during the meeting, the meeting is declared closed.

A motion is a formal recommendation a member puts to a meeting for consideration and debate, by saying I move that. Motions are useful tools in the effective running of a meeting as they help avoid confusion and speed up action. There are two types of motions:

Each motion put forward has to be supported (seconded) by another person before discussion. The chair asks the proposer to speak to the motion. Other members can add to this discussion. If there is no discussion, the motion is put to the meeting for a decision, and members indicate (by vote) whether they agree or disagree with it. Only one motion can be considered at a time and all motions should be minuted. If a substantive motion is passed, it becomes a resolution.

The order of motions is very important. If an amendment is moved, it should be dealt with before the main (substantive) motion. The meeting then returns to the motion (amended or not) that was first discussed. If the amendment is carried it is incorporated into the motion, which is then further discussed. If required, other motions can be put to further amend it. 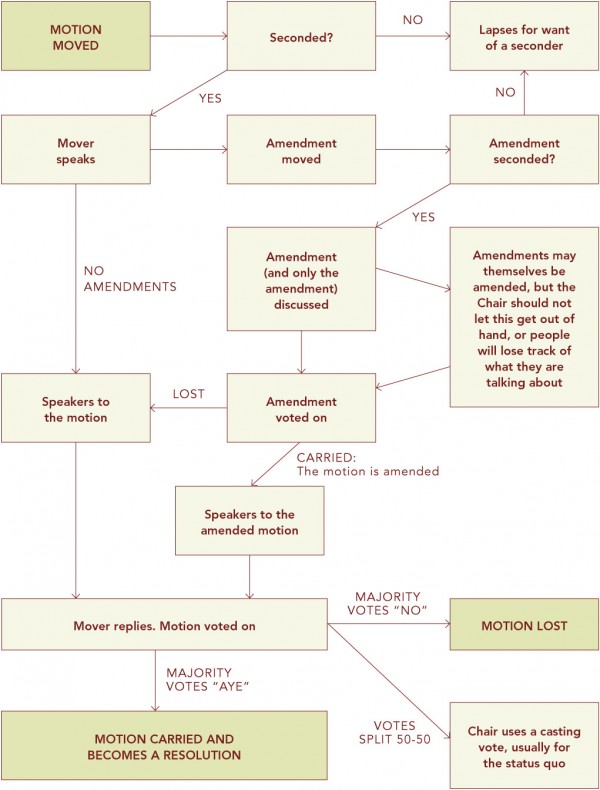 Add to my Toolkit

Information about running formal meetings with established agendas and procedures.