One of the roles of community groups is to bring issues to the attention of government so they can be addressed at a national or local level through legislation. Community participation is a vital part of democracy, and community organisations represent people and opinions that might not otherwise be heard.

Some of the more common ways of having your say with central government include:

In order to influence government decision-making, it is useful to understand the typical pattern of policy development by central government. This is represented in Figure 1. 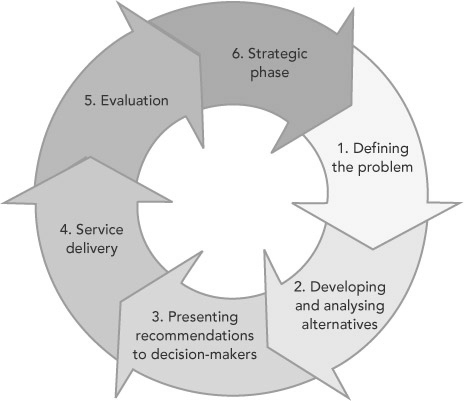 Community organisations are typically involved in the policy development process at two stages:

While there are no absolute timeframes for government policy development, there is an overall Annual Budget cycle that can provide a general timeframe for focusing your efforts:

Lobbying is a planned effort to advocate and influence political decision-making. Some lobby groups (such as the Business Roundtable) are rich and powerful and able to put a lot of resources into lobbying.

Community groups seldom have much in the way of resources, but they do have the most important resource of all: people, and as a resource they can be as powerful as money.

Lobbying is important because:

Direct lobbying involves meeting face-to-face with political leaders and others of influence, discussing proposals and arguing your cause (see direct lobbying checklist).

Indirect lobbying can involve bringing pressure to bear through the media so that an issue receives public attention, in preparation for a direct approach. It may also involve visiting opposition party members or opponents in the business community.

The following checklist can be used as a guide to directly lobbying someone, including a Minister or local MP:

In the case of a local Member of Parliament (MP), where electorate clinics are usually run on Saturdays and/or Sundays:

Making a submission to a select committee

Making a submission to a select committee is a good opportunity to have your voice heard by government and be part of the decision-making process. Essentially, this is giving your opinion on a new law (all of which start life off as a Bill) or a change to an old one.

There are up to 13 subject-area select committees, each focusing on one or two national topics like health or justice. There are also five specialist select committees which deal more with procedural matters, plus any number of ad hoc committees that are set up from time to time for particular purposes. About seven to 12 MPs from different parties in Parliament work on each select committee; committee membership can change.

Tip: For more information on all select committees, visit: https://www.parliament.nz/en-NZ/PB/SC/

Examples of the current select committees are:

A full list of select committees can be found here -  https://www.parliament.nz/en/pb/sc/scl/

One of the jobs of the select committee is to examine Bills and then report back to Parliament. The select committee finds out what New Zealanders think through a public submission process. This means that anyone can see what you (or your group) have said.

How do you know what Bills are being proposed?

A submission may be written or verbal or a combination of both. You may speak to a written submission and it is usual to present written material to support a verbal submission. An effective and powerful submission is a simple one that sets out your own or the group's views on the subject.

Some useful tips for making a written submission to a select committee are:

Some tips on appearing before a select committee and presenting an oral submission are:

Tip: For further details on the submission process (written and verbal), refer to the booklet Making a Submission to a Parliamentary Select Committee available from the Parliament website:  https://www.parliament.nz/media/2019/makingasubmission2012-2.pdf.

Select committees can also hold inquiries within their subject area in response to some community concern. They can call for public submissions and request evidence from organisations that may be the subject of the inquiry. After considering the evidence, committees may report to Parliament with findings and recommendations. The Government must respond to recommendations within 90 days.

These parliamentary inquiries vary in nature according to the relevant concerns at the time.

Tip: You can find out what inquiries are open for submission by referring to the New Zealand Parliament website - https://www.parliament.nz/en/pb/sc/business-before-committees/.

In many policy areas, government agencies may establish joint working parties or advisory groups that include representatives of community organisations.

Typically, these groups will call for formal submissions from the community sector during a consultation period and may also hold consultation meetings and hui to hear community views.

People can request that the House of Representatives take action on a matter of public policy or law, or to address a personal grievance, by presenting a petition to the House, through their local Member of Parliament (MP).

A petition is a document signed by one person or many people. The petition is referred to the appropriate committee, which decides whether to seek submissions from affected people or organisations. If the committee reports to the House with recommendations, the Government must respond within 90 days.

Petitions don't generally contain the same large amount of supporting evidence as a submission. However petitions should:

Tip: For full details on how to prepare a petition and the petition process, refer to the booklet Petitioning the House of Representatives available from the Get involved section of the New Zealand Parliament website -  https://www.parliament.nz/en/get-involved/features/anyone-can-be-involved-with-parliament-heres-how/

The two Acts governing access to official information are:

The guiding principle is that information must be made available unless good reason exists under the Acts for withholding it.

Anyone can make a request for information from those people and organisations listed above and the process is the same for all of them.

Some useful tips on the official information request process are:

Tip: For more details on official information requests visit:  Office of the Ombudsmen Get Help at https://www.ombudsman.parliament.nz/get-help-public

You could write a letter by yourself, on behalf of your organisation, or you could organise a letter-writing campaign.

The first thing you need to work out is who the best person is to write to:

The relevant contact details for these people can be found in various places.

Some important things to remember when writing to politicians include:

Next page: Communicating with local government

Previous page: Communicating via the media

Add to my Toolkit

How to communicate with central government - community participation is a vital part of our democracy.